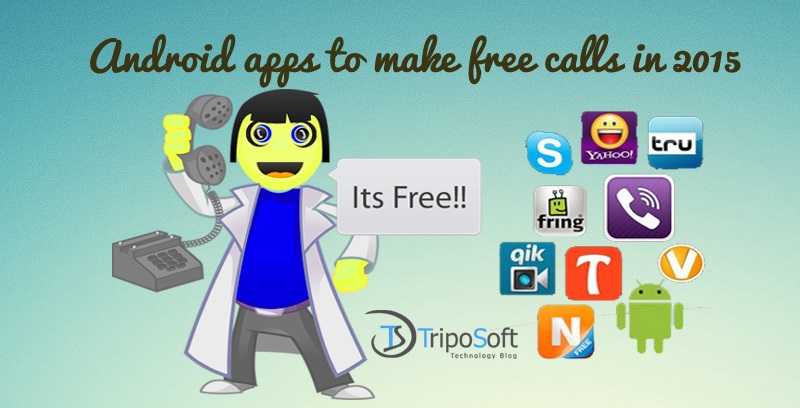 I think that you’re aware of Skype. Why not? It’s one of the oldest popular calling app which is up for grabs in both PC and smartphones. By using this you can transfer pictures, videos, messages as well. Call anywhere – domestic or International at free of cost.

Google Voice is another android app for voice calling and texts. Just like Skype you can call anytime – anywhere without any cost. All you need is internet. Thus make sure that you’ve proper connection. Read transcription and listen voice mail.

Viber is an excellent app which includes voice calling, texting and multimedia messages, video messages and present location sharing too. What I like about this app is stickers and emotion which makes messages more interesting or humorous.
You’ll be able to create group messages along with 100 people. Push notification alerts you whenever you get a call.

Line is also very known calling apps among Android users. Features are almost similar – Voice calling and text messages to anyone, anywhere in the globe. It has numerous stickers to make your messages interesting.

You can exploit Tango to video and voice calls. You can connect with 50 peoples for group chatting. It’s fully capable with 3G, 4G and Wi-Fi.

Nanu is a newly released free calling app in the Play store. It has awesome features that make it different from above apps. Unlike others app which requires fast internet, it’s capable with 3G and 2G (for slow internet connections) too. So if you haven’t faster connection then installs this app right away.

I’ve shared my hand-picked best android apps to make free calls in 2015 for calling to your friends, families or others around the world for free. As I stated above that you’ll need internet connection to make calls. If you’ve any advice or suggestion regarding this post then let us know via comments. Let me know the calling apps you’re using in your smartphone? Kindly share if you know any other calling apps?