The convertible comes with a very low level of interior noise and the trunk is more sizeable than most other convertibles available in the market right now. However, this size feature has its own limitations. Buik Cascada offers you a more sizeable trunk than other convertibles only if you commit to top – up motoring. Nevertheless, you have to close the partition which allows you to lower the roof. 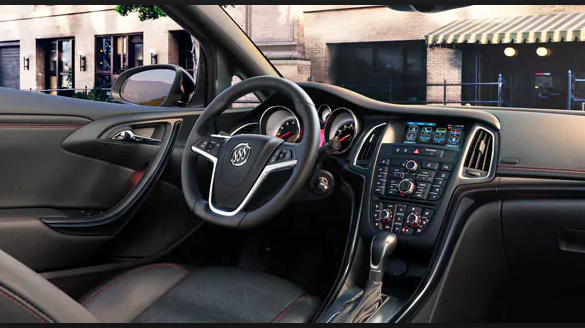 One of the core flaws of the Buik Cascada model is that in 2018, it more or less kept every features unchanged. The changes are done only in terms of new paints and convertible – top color whereas it should have initially changed its small engine first followed by the navigation system!

Even considering the flaws, we should let you know that the base Cascada still come with the best value. It is mechanical identical with the higher level of trims. Incidentally, it is also powered by the same equipment set. Now, we will move on to the trim levels.

The 2018 model of Buick Cascada convertible comes with 3 trim levels: base, Premium and Sport Touring. The basic items are more or less for all the trim levels. The Premium comes with only a handful of upgrades whereas the Sport Touring comes with an appearance package. These are the only differences.

All the 2018 Buik Cascada trim levels are powered by a 1.6-liter 4 – cylinder turbo – charged engine which produces 200 horsepower and 207 pound – feet torque. The front wheels are powered by six – speed automatic transmission.

Though the 2018 model of Buik Cascada is a reasonable convertible, it comes with a handful of flaws as well. To be frank enough, under its sleek shell, this convertible is like an aging car is nowhere near the market standard of today. Honestly, it will easily be out competed by its competitors in terms of performance, price, provided level of comfort, quality and feature list.

Moreover, though, the car has a substantial weight, the car runs with a small engine. It seems that the small engine conspires against the good features of the car to make it not only slower but also less efficient and less gratifying to drive.

The dated interior comes with a touchscreen infotainment system and buttons which is indeed a generation behind what is currently available in the market. Moreover, the hard plastics and the firm seats do not live up to the expectation. To be very honest, it doesn’t live up to the badge’s premium aspirations.

Therefore, it can be said that as a 2018 convertible model, Buik Cascada has very less to offer than what is already there in the market. So we would recommend that before you commit yourself to Buik Cascada, you should test drive some of Buick’s competitors. For example, the Ford Explorer convertible comes with a powerful turbo charged 4 – cylinder engine. So it simply evaporates the problems of the small engine in the Cascada model which reduced efficiency. Ford Explorer suspensions are adept at the job of transporting all your family in comfort. Moreover, the seats are more comfortable and the folding roof doesn’t interfere with the trunk space in Ford Explorer.

If you have a craving for sports car look alike convertibles then you might even check out Mini Convertible. It gives you a more premium feel, it is more easy and efficient to drive than Cascada. However, when the top comes down, it is a little less utilitarian than Buik Cascada.